Cast Away is the definitive tabletop survival RPG. Its Diminishing Dice mechanics reflect the ever-worsening condition of survivors in the aftermath of a disaster—without tracking Hit Points or burdensome injury tables. Death is permanent, therefore, we've created a Haunting system that keeps players engaged long after their characters pass away. Cast Away contains a modular set of guidelines and is easily adapted to any setting, environment, or circumstance.

What do you need to play?

Cast Away is a tabletop RPG. You'll need:
2+ Players & at least one set of Polyhedral Dice (minus the d20)

Written by Joe O'Brien & Reilly Qyote
Layout & Design by Reilly Qyote
Special Thanks To:
B, Levimax, Clint, Matthew K, and Rugose Kohn
for all your support and inspiration.

We’d love to hear from you!

If you have stories to share, want to give us feedback, or just wanna chat about RPGs, feel free to drop us a line at afterthoughtcommittee@gmail.com.

Sometimes we make stuff on Twitch.

Track us down on Discord.

Support this tabletop game at or above a special price point to receive something exclusive. 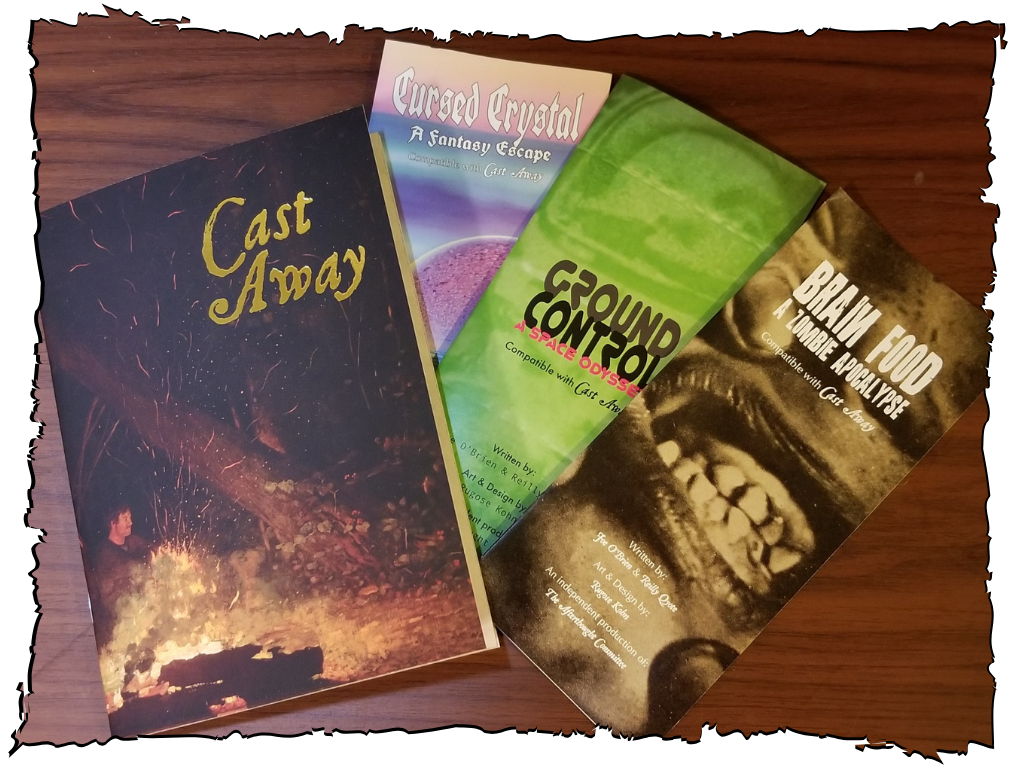 We are SOLD OUT! Purchase your Cast Away bundle in Canada with Ratti Incantati while supplies last!

Cast Away is a short (20-pages) but content packed survival TTRPG. There are detailed rules for surviving in the wilderness after a horrible accident, and you get to use your polyhedral dice!

LikeReply
Pod of Blunders1 year ago(+2)

Absolutely gorgeous game with so much potential for drama. For a full review, head here: https://podofblunders.com/2021/10/01/cast-away/

My only real complaint is that it contains just one "scenario" (rainforest plane crash) where I think two or three (island shipwreck, arctic expedition gone wrong, etc.), would help "sell" the concept better.

That said, the huge amount of flexibility in setting makes coming up with new stuff a breeze; I've already developed a fair bit of homebrew for it and am writing up more right now!

One big question regarding the rules, though: how would a "hunt" under the vanilla rules work? For example, if a player is hunting a deer? If a player has the Hunting skill, they'd normally get a +2 to their Challenge rolls... but the rules say that a Contest of two opposing living beings (in this case, a deer vs player) should only use a player's raw CD without any Fortitude or skill bonuses. Does that mean the Hunting skill (and others like it) wouldn't be used in trying to kill a deer but only - say - in tracking/locating it? What about if a player wanted a Sharpshooter or Unarmed Combat skill (they're playing a military character)? If they can't use those skills in combat, would any combat-type skills be pointless to the system?

Thanks so much for supporting our new game, glad you enjoy it!

We're currently working on a pack of scenarios to supplement the game with three different settings and some alternate rules so keep an eye out for that coming ~March. We'll be hosting a jam to create your own scenarios then as well since the system is just perfect for generating survival scenarios. If you have a Discord, we'd love for you to drop into ours and share your homebrew stuff. Also, if you have any more questions we're pretty much always online.

As far as Hunting (Challenges) vs. Contests go, in the vanilla rules your example would play out something like this: Your hunter has bonuses to rolls involving tracking, sneaking up, and attempting to kill their target. As long as there isn't a more direct conflict between the two creatures, the bonuses are still calculated. However, if the initial hunt is unsuccessful and the creature becomes alerted and is actively running away or fighting back, the Contest rolls begin and are an attempt to simulate chaos or luck rather than pure skill. For example: If I'm skilled at Hunting and come across a bear, my skills might go out the window as the creature barrels down on me. At that point, it's less about how well you can track/shoot and more about whether or not one side or the other is lucky in a moment of panic.

That being said: We're releasing some examples in an update soon that adds a bit more depth to combat but mostly encourage you to make it your own. If adding +2 in a combat situation makes sense, go ahead and make it happen :D Just remember, a creature with a D4 against a combatant with a +2 will almost never succeed.  Anyway, we hope this helps clarify some things. Hope you drop in to say hello on Discord!

Cast Away is a crunchy, compact survival RPG.

It's 14 pages, with a very cohesive visual design and clean, readable layout, and it uses some nice repurposed technical drawings to illustrate key elements and add immersion.

Despite the cover's first impression, Cast Away isn't anchored to a specific place or setting. It's versatile, as long as the thing you want to do with it is a wilderness survival situation. The included sample scenario is a plane crash in the 70s amazon rainforest, but without a doubt you could set your game anywhere from an oil platform in the ocean to a derelict lunar colony to a crypt city overrun with undead.

Mechanically, Cast Away does a very good job of covering the things it absolutely needs to cover, but it also does a good job of stepping back and letting the GM choose how situations progress. For example, every Survivor has a pool of dice for their HP and Skills. Every time they take damage (called Conditions) they remove the highest die from their pool. When they heal, they recover the lowest die out of the dice they're missing. This means that in any roll, the stakes are usually crystal clear. Either you're working to improve your situation, or you're working to stave off a Condition.

Additionally, decision-making is as important as dice-rolling. Let's say a Survivor drinks non-potable water. There isn't an express difficulty rating for that. The GM could choose to make up a target number and call for a roll, or they could simply say "you contract a parasitic infection," and then it's on the players to figure out how to manage their evolving situation.

This mix of "hands off" and "hands on" works really well for how the book engages with the material. In some ways, Cast Away's GM functions almost as a prompt, simply reminding the players of what their immediate problems are. The players do the rest, propelling the game forward under their own initiative.

Surprisingly, I think Cast Away might be an excellent first rpg or convention game. It's very easy to learn, the sheets are very well-composed, there's a cheat sheet for players to help make picking up the rules even faster, and the premise of Cast Away is extremely easy to engage with and automatically compelling.

You don't have to worry about figuring out adventure hooks in a survival scenario. The hook is to survive.

Of course, Cast Away does advertise itself as relatively lethal, but on reading through it seemed much less murdery than a standard osr low-fantasy game. Death in Cast Away usually comes through attrition, after a long struggle, and even then dead characters linger as a pool of dice that their player can spend to influence a few more rolls. It's mechanically neat, and it keeps people from checking out after they mulch a character.

As of 1/4/21, there *is* some relatively dark material that the book alludes to as potential character backgrounds, so you may want to have safety tools on deck, but that material is also not required for play. You can also use scenario crafting to tailor your scenarios to the tone that your group is looking for, whether it's brutal and exhausting or frantic and adventurous.

So overall, if you like tight, well-designed games, if you like survival scenarios or games that run perfectly at conventions, or if you've ever played dnd on a camping trip, I'd strongly suggest picking this up.

A simple, yet elegant ruleset that manages to have innovative mechanics. Encourages inventive and narrative play over "crunch". Ideal for alternative play formats like Play by Post and Play by Email. Would make for an amazing alternative to "ghost stories" around a camping trip campfire!

I love the conditions mechanic, I really dig games where injury impacts your effectiveness. It just feels more real, and it's really appropriate here.

The cover art is superb, as is the art throughout. Is that an old oil painting?

Thanks Gray! The shrinking die mechanics were a big part of developing this game, I'm glad it communicates our health system appropriately.

The cover is  an old oil painting, good eye! We found this image in the public domain and knew right away that it fit our game perfectly. 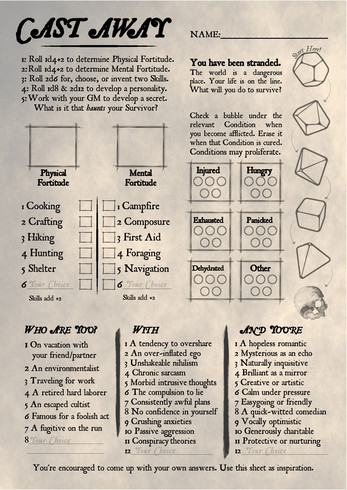 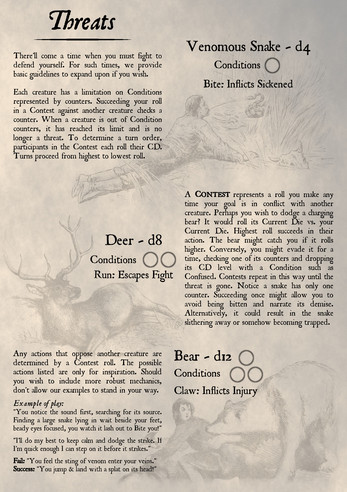 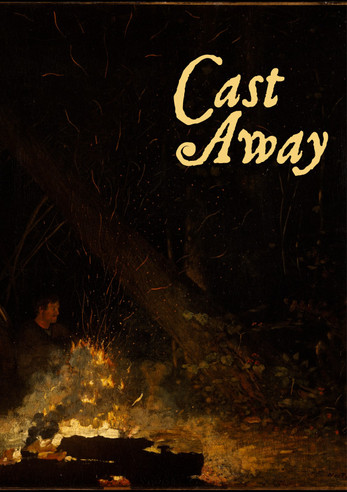